So thanks to (a) a long and convoluted search involving tweets and trips to two different Tesco stores and (b) a delightful two week bout of tonsillitis, my review of Issue 11 has been postponed. In fact, I’ve three different LEGO Magazines waiting to review, but I thought I’d jump those are get straight to the newest – LEGO City Magazine Issue 12.

The hero of Issue 12 is Firefighter Phil, and we follow his exploits on his first day as a fully qualified firefighter in LEGO City.

There’s no real need for me to go through the contents of the magazine – the comic, puzzles and artwork are all the usual high standard.

There is a pretty big negative this time though – I’m really really disappointed with the LEGO toy that comes with Issue 12. This issue we get a Firefighter Phil Minifigure, a flaming barrel which I’m assuming is an Octan barrel (there’s no stickers or prints, just the green, red and white colours) and we also get a white fire extinguisher (made up of tap and 1 x 1 round brick) but that’s it. And when compared to and even the Diver with Shark in Issue X, this is pretty mean, particularly as the magazine cost €6.35. 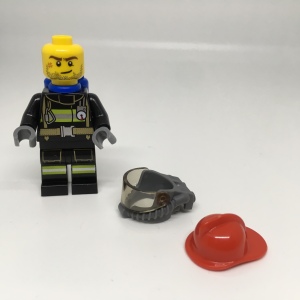 Oh, I forgot to mention, and you may have seen in the cover photo above, but you also get 4 The LEGO Movie 2 collectable stickers free with Issue 12. These stickers, as you can see, are also particularly meh.

In the next issue of LEGO City Magazine the Cool Toy looks really good. It’s a Gardener with a ride-on Lawnmower! I don’t know if the target audience of KFOL’s will be as eager as me but I’m really excited for this one. In a LEGO City filled with City Police, Sky Police, Firefighters, it’s nice to have a normal, everyday person…